16 Jan 2021
AOM member, researcher, and Wharton's Business School Dean Erika James talks about the advisors who helped guide her through the hallways of academia.

Originally found at The Wall Street Journal, by Francesca Fontana. 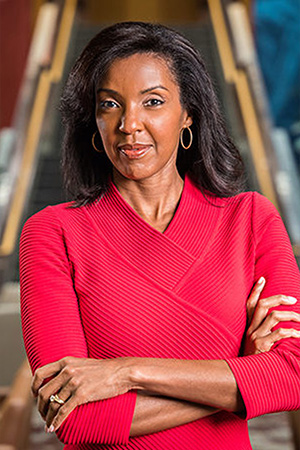 As a young Ph.D. student, Erika James wasn’t sure she wanted to work in academia. Three decades later, she sits atop one of the nation’s most prestigious business schools.

In 2020 Dr. James became dean of the Wharton School at the University of Pennsylvania, becoming the first woman and person of color to hold that post in Wharton’s 140-year history.

“What’s salient for me is the recognition that so many people are watching,” she says. “I want my life to have meant something, and if there are people who can feel inspired by what they’ve seen me do, then it really doesn’t get any better than that.”

Dr. James started in the footsteps of her parents. Her mother was an educator and her stepfather was a clinical psychologist, so when she went to college she majored in psychology. She was fascinated by human behavior, but realized early on that she wasn’t interested in the clinical track.

She went on to receive her master’s and doctoral degrees in organizational psychology at the University of Michigan, saying she didn’t fully understand when applying to Ph.D. programs that they were largely intended to prepare students for a career in academia.

“I never saw myself as someone who was pursuing becoming a professor,” Dr. James says. “I really just wanted to pursue my interests.”

During her graduate program, she took some time off to work for American Express Co. to get a sense of what she might be giving up depending on which career path she chose. It was a dissertation adviser who advised her to turn down a number of consulting jobs after getting her Ph.D.

“She said, ‘Just try higher education for one year,’” Dr. James says. “If you don’t like it, you can, always leave and go the corporate route, but it’s really hard to transition in the other direction.”

She didn’t look back.

Continue reading the original article at The Wall Street Journal.